Mooselookmeguntic – We’ve Been There!

If you’ve been following this Blog you’ve noticed that I share a lot of, well, what some would call HARD work.

Some might even say “All work and no play makes Craig a dull boy. I mean, what is it all for?!?“

It is in that spirit that I share this and a few related / follow-on posts.

When not pursuing other endeavors (actively working a consulting engagement or a charitable activity) you are likely to find me (and members of my family) “in the woods.” This could include, for example: mountain biking, skiing, or camping.

And, doing so – during the week. I mean, why would I do these activities on the weekends when I’d have to contend with all those other carbon units (I mean people 🙂 )?

This summer we had the opportunity to go on 3 camping trips (with the 4th scheduled for next week). Not in a mobile home, mind you. We are talking tents, backpacks and, for 3 of our trips, staying at remote sites requiring a hike or canoe to reach.

Last summer I took my 2 middle boys on a 5-day “guided” canoe trip “up” the Allagash Wilderness Waterway, in northern Maine. I was considering doing the same (only longer in duration) this year. However, in the spirit of frugality (not paying for a guide), adventure and “do-it-yourself” I decided to target an area unexplored (by me) in the northwestern woods of Maine.

In perusing my well-worn map of Maine I happened across Mooselookmeguntic Lake. It took a while before we could properly say that one.

The map indicated there were a number of remote sites serviced by the state which are available on a “first come, first serve basis.”

I also noticed that there was a privately-owned and managed campground with remote sites on the mainland and on the islands of the lake. Good backup in the event the prior sites were occupied or not reachable.

Looks good to me! Now, who can I recruit to go with me?

My wife was in! The boys, however, have many scheduling conflicts (each has a job, the 2 middle boys also train clients in the evening and attend college working towards their degrees in Exercise Science, and the youngest, our 17-year old, is going through the process of entering the Marines via their delayed entry program).

Since I had just wrapped up a client engagement (in early July) it was time to go “into the woods” – NOW!

So, for the first camping trip of the summer the boys couldn’t join us.

Cindy and I packed our gear and headed north.

It was roughly a 4-hour drive to the area of the target sites. This included traveling a number of miles on barely maintained, single-lane dirt roads. I AM LOVING THIS! Since we were in my wife’s Suburban and brushing up against tree limbs and such, she was “just a bit” on edge 🙂

Upon traveling the dirt road for some time, we found a more primitive road that (per our map) promised to lead us to the target sites. After it turned into more of a trail (and my wife was further “on edge”) I decided to park the vehicle and jump on my mountain bike to scout the path ahead. It wasn’t too long before the trail ended and I determined that the originally targeted sites were not reachable by land (via a method that wouldn’t ruin my marriage. My wife hates it when I make her bushwhack)…

So, upon returning to the truck it wasn’t hard to convince my wife that we’d instead opt for the campground on the other side of the lake.

About an hour later we arrived at Stephen Phillip’s Memorial Preserve. You can check it out by clicking here. Simply AWESOME!

Upon entering the office we asked if they had any available sites for the next few nights. Thankfully, they did. It was a site requiring a half-mile hike – for which we more than prepared! Sign us up!

We were able to get all our gear into the site in just 2 trips. This, based on properly packing only what was absolutely necessary! 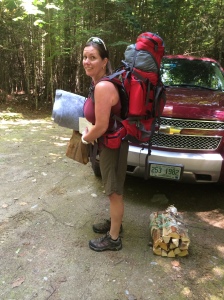 Within an hour our tent was up and the site was prepared for our stay. This was our front yard. 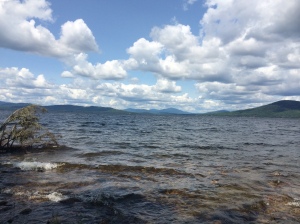 Later, after doing some exploring, we found our very own beach! 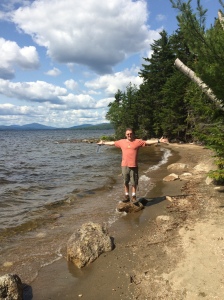 No camping trip would be complete without doing some fishing. Being that Mooselookmeguntic is a crystal clear, cold-water lake we knew there were some trout in these waters. However, on this trip we caught other fish, trout not being among our bounty.

Speaking of wildlife…My favorite sound in all the world is that of a loon. If you’ve never heard one before, it is a combination of being eery, silly, and at the same time unbelievably peaceful. This lake has more than I’ve ever seen or heard. Other wildlife we observed included a bald eagle flying right over our campsite and deer.

And, because we were in a remote campsite with no kids, we got to go for our favorite kind of swim, the way God originally intended – the skinny dip.

We knew we’d be back!

Upon getting home we challenged each other to find 3 people who had been to Mooselookmeguntic, crediting ourselves as 2 of these 3 people 🙂

In future posts I’ll share details of our other (summer of 2014) trips “into the woods.”

3 thoughts on “Mooselookmeguntic – We’ve Been There!”

Follow Be Brave Not Safe on WordPress.com
Join 56 other followers