Mooselookmeguntic – We’ve Been There (Again)

Continuing in the spirit of reinforcing why one would go about doing “all the hard work” outlined in this blog, just sharing some of the freedom that can be realized…Here we go again – “into the woods.”

Just a few short weeks after our prior trip to Mooselookmeguntic Lake we again headed to our new, favorite spot on the planet. And, as much as we tried to orchestrate the logistics and scheduling with our boys, it was just Cindy and I, once again 🙂

This time we selected a site requiring a 1/2-mile canoe trip across the lake, to Students Island. A 1/2-mile doesn’t sound long, and it isn’t, unless you are rowing a canoe weighed down with gear such that you only have a few inches margin for error (should the canoe tip) before taking on water. Or worse, rolling the canoe and having all your gear floating around, or sinking to the bottom of the (deep) lake!!!

Cindy doesn’t look convinced, does she?

Thankfully, the trip to the island was pretty much a breeze. Or, should I say there was no breeze/wind. We’ll cover the wind factor later…

This was our front yard. 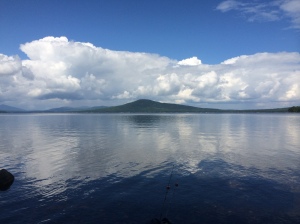 After settling in, it was time to catch some trout. We had a much better shot this time, with the canoe, than fishing from land (as we did during our prior visit). The good news is that a nice, foot-long trout was caught. The bad news (for me) is that it was caught by Cindy 🙂

And, yes, she guts her own fish. What a woman 🙂

Since we were keeping the rest of the family up-to-date by posting pictures to iCloud my Dad had the opportunity to jab me by asking when Cindy was going to give me a lesson on how to catch that prized fish (the trout). Father, go pound sand!

Later in the week we were doing some fishing (in my attempt to surpass Cindy’s accomplishment). We were in the middle of the lake in our canoe and commented that the weather was looking kind of peculiar. That is short for: the clouds look ominous. And, the forecast on my iPhone corroborated by indicating that t-storms (which bring wind) were on their way. The middle of a fairly large lake, in a canoe, is NOT where you want to be for t-storms.

Knowing that we still had to make a trip to the mainland to get some fresh ice for our…provisions…we headed for the campground’s boat launch, hopped in the truck and took the short ride to the village of Oquossoc, ME.

On returning from the village we observed the lake, in combination with the wind. It was no longer tranquil. It looked a bit, well, angry. Just the same, we had to get “home.”

So, we shoved off in our canoe and soon realized this was going to be a battle. The trip that previously took less than 20 minutes, with a fully loaded canoe, took us “at least” 45 minutes as we rowed across the heaving lake (taking on water as waves crashed over the canoe) and then up the shore of the island – against the wind.

Phew. We made it.

This is our front yard, shortly after the crossing…Doesn’t look so bad, from land…But, do you see those white caps? That is when you know it is rough (out there).

As we settled back in we noticed a visitor walking down our path. A woman had come to ask if she could check out the lake from the vantage point of our site. You see, her family was scheduled to leave, but feared the crossing in their fully loaded canoes, including young children. NOT a good proposition at this time. And, the forecast only suggested that it was going to get worse as the day proceeded. So, they hiked back to their site to wait it out. Thankfully, at about 7:30pm, the wind died down enough to allow them safe crossing. So, they made their escape. And, as far as we know, they reached the mainland 🙂

Cindy and I enjoyed our final night.

We knew we’d be back – again (to Students Island)!

In future posts I’ll share details about our other (summer of 2014) trips – “into the woods.”

2 thoughts on “Mooselookmeguntic – We’ve Been There (Again)”